I’ve several deadlines pressing on me, but wanted to take time out for a brief tribute to children’s book author E.L. Konigsburg, who just passed away at age 83.  That’s a good run.
Konigsburg is best known for her 1967 Newbery Medal winner FROM THE MIXED-UP FILES OF MRS. BASIL E. FRANKWEILER, about two kids who run away to the Metropolitan Museum of Art in New York City.  It’s one of my favorites, and still a book I re-read with pleasure every few years.

It’s one of those premises that is irresistible to a kid, because it acknowledges two fundamental truths.  The first is that every kid has a fantasy of running away to have an adventure, and the second is that kids love museums.

Konigsburg was one of a number of children’s and young adult authors that rose to prominence in the 1960s and 1970s with books about kids in NYC, Judy Blume  and HARRIET THE SPY’s Louise Fitzhugh being another major example.  In elementary school, these books were endlessly fascinating to me.  It was such a different lifestyle described, taking the subway, living in an apartment and letting yourself in…to someone in the suburbs, it was like science fiction, some kind of alternate reality where these strange things were part of everyday life.

Plus, that’s just a great title.  For years I’ve joked about my messiness by saying “my filing system makes Mrs. Basil E. Frankweiler look obsessive-compulsive.”  The cool people are the ones who get that joke.

Even at the time, I took note of the book’s odd structure — the story is told after the fact by the titular Mrs. Frankweiler, and who she is and how she comes to be involved in the narrative is one of the central mysteries, along with the secret of a statue she’s donated to the Met that the kids find fascinating.

The key to the story is that it understands why the main character of Claudia would be so fascinated with the statue, and why she’d want to run away in the first place, despite a relatively happy home life.  Claudia wants to be “different,” to have a greater sense of who she is and what she’s capable of doing.  Mrs. Frankweiler later reprimands her a bit to make the point that running away isn’t the answer and that she’s caused her family terrible worry through her actions, but you can still tell that she admires the kid’s gumption.  That and a note that the Met has beefed up security at the end of the book play as “don’t try this at home” warnings, but really, what you remember is the sheer cleverness of how Claudia and her brother Jamie survive at the Met — hiding dirty laundry in a sarcophagus, bathing in the fountain and scrimping extra coins, joining in on school tour groups to keep “learning” during their hideout.  Really, it seems not so much like running away as the ultimate vacation.

The book was filmed twice, with two Hollywood legends as Mrs. Frankweiler, as THE HIDEAWAYS in 1972 (though some editions have it under its original title) with Ingrid Bergman, and under its original title for a 1995 TV movie with Lauren Bacall.  It’s odd, considering that both actresses are heavily associated with Humphrey Bogart.  Neither completely captured the charm of the original book, and both upped the “running away is bad” message, but they have their moments.

FROM THE MIXED-UP FILES OF MRS. BASIL E. FRANKWEILER shares a quality with Konigsburg’s later books in that many have a keen ear for how children see themselves and the world around them, and how they interact with one another.  In the same year she won the Newbery for FRANKWEILER, she received the unprecedented honor of also receiving the Newbery Honor for another of her books published that year, JENNIFER, HECTATE, MACBETH, WILLIAM MCKINLEY AND ME, ELIZABETH.

Set in the suburbs, the book is based on the simple, relatable idea of a kid pretending to be weird or magic to seem more interesting and make a friend…except it tells it from the perspective of the other kid’s point of view.  The titular Jennifer has just moved to the suburbs and meets Elizabeth, who claims to be a witch and involves Jennifer in all manner of rituals that will be her “initiation.”

It’s clear to the reader early on that Elizabeth isn’t a witch, but it’s also clear that her brashness and confidence are part of an act, and deep down she’s as lonely as Jennifer.  As a kid, I understood where both parties were coming from, and how the awkwardness of making a friend, of forming some new relationship, can make you feel like you’ve got to create the facade of some extraordinary, larger-than-life being to get the other person to want to be around you.

The moment I never forgot came near the end of the book, where Jennifer finally explains to her mother why she doesn’t want to be friends with Cynthia, the more “normal” kid the mom would prefer be Jennifer’s friend, the kind of kid who’s lovely to parents but a snob when adults aren’t around.  Jennifer’s retort to her mother is a thing of beauty:

“Mother,” I said, “If you really want to know, I’ll tell you why.  Cynthia is a phony.  I’ve known for a long time that she’s a phony.  And worse than that, she doesn’t know she’s a phony.  She believes in Cynthia.  She’s a serious phony.  And the only way I can stand her is to absolutely ignore her.”

“She believes in Cynthia” is a line that’s stayed with me for years, because it sums up so many people I knew as a kid, and have known since then — the people who believe their own hype, who create an idealized shell with nothing underneath.  If you were the kind of kid who knew and hated a Cynthia, you were in the audience for E.L. Kongisburg.

Kongisburg wrote many other great books, which I’ll touch on quickly.   They had some fantastic titles, such as JOURNEY TO AN 800 NUMBER, UP FROM JERHICO TELL, and SILENT TO THE BONE.

A few I want to particularly note are ABOUT THE B’NAI BAGELS, regarding a Jewish children’s baseball team…

(GEORGE) is a strange but fascinating volume about a brilliant young boy who talks with his “inner voice” and winds up preventing a tragedy.  It has a bit at the end talking about the state of the book’s antagonist and how he hates the main character, and leaves the note, “Hate is a hole; it can be filled, and maybe one day it will.  With gratitude.” 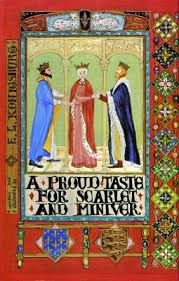 …and Konigsburg won a second Newbery in 1997 for THE VIEW FROM SATURDAY, which predated SLUMDOG MILLIONAIRE a bit by telling the individual stories of a group of schoolkids on an academic competition team, and how their unique backgrounds qualify them to answer the difficult questions they’re posed. Konigsburg’s books were often mysteries that weren’t mysteries — there were no stolen jewels or dead bodies, but twisty narratives and twisty characters that gradually revealed themselves to the reader.  They were about the endless curiosity of being a kid and trying to figure out the world around you, and where you fit into it.  And they did so with gentleness and good humor.

You can see the influence of her work in strange, subtle places, my favorite being the throwaway moment in Wes Anderson’s THE ROYAL TENENBAUMS explaining how the young Tenenbaums briefly ran away to a museum…

On the DVD commentary, Anderson admits the homage, and it seems only appropriate.  Anderson seems like he would have been the kind of kid who really got the characters in Konigsburg’s books — kids who bring imagination and adventure to their ordinary lives, and discover something extraordinary about themselves in the process.

I can only wonder how many kids tried running away to a museum as a result of her work.  Probably more than she’d be comfortable admitting.  Well, there’s worse things to inspire.

BONUS: A lovely series of illustrations inspired by FRANKEILER by the great comic artist and illustrator Phil McAndrew.  Check ’em out!