In January, I wrote some more offbeat pieces, such as an interview with literary novelist Michael Malone about his time writing the daytime soap ONE LIFE TO LIVE as that show ended.  I also did a look at the insanity that was the locally-filmed ONE TREE HILL.

I also got to do a pretty funny interview with author Daniel Handler, aka Lemony Snicket.

In February, I did an interview with ADVENTURE TIME creator Pendleton Ward for Newsarama around this time, where I had guest-questions from people like Paul Pope, Scott Kurtz, Mike Allred and some others.  Here’s a link to Part Two, which links to Part One.  I also got Tony Millionaire to do an original piece of Lumpy Space Princess for the interview.

In March, I did an interview with Trace Beaulieu from MYSTERY SCIENCE THEATER 3000 and with Jason Mewes of Kevin Smith’s various films.  Later, I went to see Beaulieu and the rest of the MST3K/Cinematic Titanic crew when they performed live at the Carolina Theatre, and got my picture taken with Joel Hodgson. 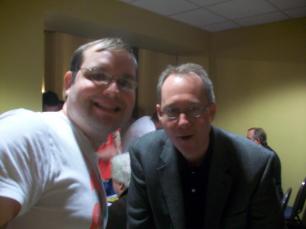 Also in March, I went to the Mad Monster Party show in Charlotte.  They had a number of horror and B-movie legends there, and I certainly got my money’s worth.  I got to meet Angus Scrimm from PHANTASM, who was even nice enough to record a voice-mail message for me…that unfortunately he couldn’t quite figure out how to speak into my phone, so I just recorded it with my digital recorder, and can’t really figure out how to get the MP3 onto my voice mail. 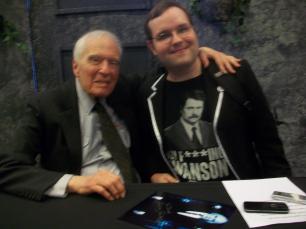 (He’s sitting down, and extending his arm while I’m leaning against him.  I did not sit on the Tall Man’s lap.) 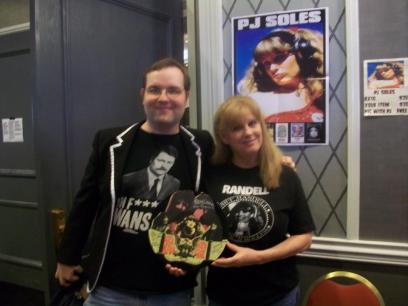 I also met the lovely P.J. Soles from ROCK N’ ROLL HIGH SCHOOL and many other films.  She signed a print based on HIGH SCHOOl that was done on a vinyl record for a recent screening.  I also got the print/record signed by Mary Woronov and Marky Ramone at the show.  It possesses supernatural powers now.

I also met Rutger Hauer at the show, but he was charging a lot for pictures.  I did get an autographed picture for my man Jesse Moynihan, to whom I traded it for a drawing of his ADVENTURE TIME creation the Ancient Psychic Tandem War Elephant. 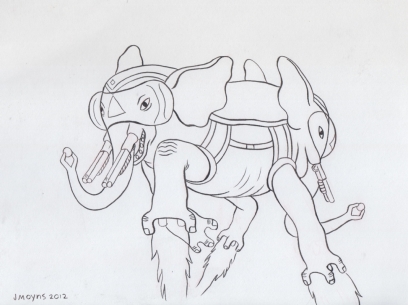 Toward the end of March, I got to boost my nerd-cred with an interview with Ira Glass of THIS AMERICAN LIFE.

I also talked with Karl Kerschl about one of my favorite webcomics, THE ABOMINABLE CHARLES CHRISTOPHER.

March was quite productive.  No wonder I blocked subsequent chunks of the year out.

I recall April was a bit slower, as this might have been around the time I taught a class on “Great Films and Their Scripts” at an extended learning center.  I do remember I did this fun little piece on Garth Ennis and John McCrea’s HITMAN, with some quotes from older interviews I did with them.

May was also a mite slow, though I did enjoy doing this interview with Mark Waid about the end of his book IRREDEEMABLE.

I also quite liked this piece about the oddball characters from the old DC chestnut DIAL H FOR HERO.

And I did a piece about trying out some anime series.

In June, I got to host a panel with my man Jeffrey Brown at Heroes Con!  I did a whole slideshow and we showed some behind-the-scenes art for his book DARTH VADER AND SON and some footage from SAVE THE DATE, the movie he co-wrote that stars Alison Brie and Lizzy Caplan.

As is usual at cons, I got a bunch of artwork, including this watercolor of the 1960s characters the Atomic Knights by Matt Kindt.

Throughout the year, I got to see a lot of great older movies on the big screen with 35-mm prints at the Carolina Theatre and other local houses.  Some films I saw included: THE JERK; PLANES, TRAINS & AUTOMOBILES; THE BRIDE OF FRANKENSTEIN; THE CREATURE FROM THE BLACK LAGOON; the 1979 DRACULA; STUNT ROCK; THE SWORD AND THE SORCERER; E.T. (not-special edition); WHO FRAMED ROGER RABBIT?; GHOSTBUSTERS; MASTERS OF THE UNIVERSE; THE NIGHT OF THE HUNTER; the 1980 FLASH GORDON; ROSEMARY’S BABY; DRAGONSLAYER; a half-dozen Miyazaki films; I’m sure there were others.

I had several very good articles in July, including this look back at Spider-Man’s many strange media adaptations…

And a talk with the creators of the Batman villain Bane just in time for his appearance in THE DARK KNIGHT RISES.

I don’t recall much going on in August, though I did get to interview ADVENTURE TIME writer/artist Tom Herpich and Tom Siddell of GUNERKRIGG COURT.

September was quite busy; I went to the Small Press Expo (SPX) in Bethesda, Maryland, where I met a bunch of artists and got a bunch of drawings.  I got some wonderful pieces at a charity auction, including some Larry Marder BEANWORLD art and this “Space Kid” piece by Farel Dalyrmple.

I also did a fun little retrospective of the Chris Elliott series GET A LIFE.

October was pretty much the busiest month of my professional life!  I did a week of guest-posts for USA TODAY’s Pop Candy blog, and a number of big interviews.

…with ERAGON author Christopher Paolini about life after his blockbuster series…

…with guys like Scott Snyder, Joe Hill and Paul Pope about comic books that scared them…

…and I had way too much fun with this piece about comic book gimmick covers.

In addition, my first comic was published and got lots of good reviews you can read here.

I did a whole bunch of 1980s toy-themed posts after this, and talked to the guy who wrote BLACKHAWK DOWN about his new Osama Bin Laden book.

In November, I did still more Pop Candy posts, and “endorsed” a classic comic book character for president with quotes from Neil Gaiman and Ed Brubaker.

I also co-hosted three panels at the NC Comicon, including a one-on-one session with HELLBOY artist Duncan Fegredo about his life and career.  He did this nice piece of the Lich from ADVENTURE TIME for my sketchbook.

This also led to a strange adventure where I helped reunite Mark Waid with the first-ever drawing of a character he co-created, Impulse.

Anyway, December is still going on and I think I have a few good pieces left in me before the year’s out.  But that certainly was a lot of stuff, wasn’t it?